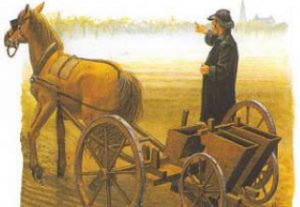 In the 1960s, when the Association was formed by Brazilian fertilizer producers, attitudes to fertilizers were little changed since the 19th century. They were used on only 30 per cent of cultivated land, and in volumes no greater than 18 kilograms per hectare. The 14 founding companies – Benzenex, CBA, Copas, Copebrás, Fertibrás, Granubrás, IAP, Itaú, Manah, Murakami, Quimbrasil, Takenaka, Ultrafértil and Zanaga – created a powerful task force with the purpose of demonstrating the economic benefits of fertilizer use to agricultural producers.

The founding companies provided funding for ANDA’s activities, at that time: encouraging agricultural research to increase fertilizers’ effectiveness; disseminating the results of research; giving farmers advice on best agricultural practice; and assisting the government in modernization projects involving fertilizers (e.g. erosion control and use of certified seeds). ANDA also served as a forum for companies to share expertise on improving their industrial processes.

Activities since the 1960s

One of ANDA’s first activities was to organize a series of meetings to publicize its mission to agribusiness opinion leaders in the states of Minas Gerais, São Paulo, Paraná and Rio Grande do Sul. In 1969, it initiated an ambitious project – demonstrating the benefits of fertilizer use in the cultivation of rice, corn, beans and cotton on 500 test fields in the south of the state of Goiás, the Minas Triangle (Triângulo Minerio) and the south of Minas Gerais. This project was later extended to the vast Mato Grosso region. There were 3000 test fields by 1975, all co-ordinated by ANDA. The project was inspired by, and managed in partnership with, the Food and Agriculture Organization (FAO) of the United Nations. FAO had already run similar projects in 17 countries. Some one million agricultural producers in the region eventually took part in 45,000 demonstrations, using fertilizers supplied by ANDA members. Another project partner was ABCAR, the national agricultural development agency, which provided limestone.

Field days were the project’s highlight. Farmers, who could compare yields from fertilized and non-fertilized soils, learned to make cost-benefit calculations (e.g. “each cruzeiro spent on fertilizer means a two-cruzeiro profit”). ANDA’s agronomists gave presentations on new fertilization techniques as well as supporting themes that included pest control, planting times and crop management. In 1972, some 4000 agricultural producers attended field days in the state of Minas Gerais.

The project’s success led to its introduction in other parts of the country. It was launched across northeastern Brazil, from the state of Bahia to the state of Maranhão. The Association set up 300 fertilizer trials and planted 1500 demonstration fields for cotton, corn, manioc, pineapple, rice and beans. In 1997, at the request of the Banco do Nordeste, which was financing the project, it was extended for three years and six crops were added: sugarcane, soy, citrus, castor beans, onions and sorghum. The number of fertilizer trials increased to 750 and the number of demonstration fields to 3500. In its six years in northeastern Brazil, the ANDA/FAO/ABCAR project benefited 347 municipalities in nine states.

Some 9000 agricultural producers in 15 states attended ANDA field days during the ten-year period 1969-78, a total of approximately 90,000. In the same period 8000 fertilizer trials were organized. By letting farmers discover the usefulness of fertilizers for themselves, the intensive campaign was instrumental in making sure these products caught on.

As ANDA completes 40 years of work, having achieved unqualified success in terms of its original mission, it is setting its sights on other, equally important activities. Its main objectives are now to diffuse information on the correct use of mineral fertilizers and to safeguard the image of the products and the industry. The Association is the official fertilizer sector representative in dealings with authorities, with a focus on:

Since its inception, ANDA has produced technical reports, manuals and other publications of importance to the sector. A basic part of its mission is to disseminate state-of-the-art crop nutrition technologies to drive agricultural production. It organizes courses, seminars and talks for agronomists, agricultural engineers, technicians and people providing various services to agricultural producers.

In conjunction with other agribusiness associations, ANDA operates a statistical service for the fertilizer sector in the form of an annual publication. The Statistics Annual, Brazil’s most complete and respected databank on fertilizers, has appeared since 1986. A best seller for 20 years, it is an official source used by the Brazilian Ministry of Agriculture and the Agricultural Commissions of both the Senate and the Federal Chamber of Deputies.

ANDA’s Fertilizer Manual, first published in 1971, quickly became a classic in the sector. The first edition (9000 copies) sold out, as did the second edition (supervised by agronomists Eurípedes Malavolta and José Peres Romero) in 1975.

Communication is above all a question of conquering hearts and minds, so ANDA has also produced pamphlets and newsletters – whatever was needed to convince agricultural producers at a time when little was known about fertilizers. In addition to its monthly newsletter Solos & Adubos (Soils & Fertilizers), the Association’s publications include 30 Years of the Fertilizer Industry, Types of Agricultural Credit, Fertilized Cotton Yields More, Fertilizing Practice and Funfertil, the Fertilizer Quality Control Manual, and Direct Planting System: Bases for managing soil fertility. Particularly noteworthy is The Roots of Fertility (2005), a history of the Brazilian fertilizer industry.

These publications have been accompanied by talks, seminars, events and sponsorship of the column “Soils & Fertilizers” in farming newspapers such as the Correio Agropecuário, which reached a circulation of 160,000 in the 1970s.